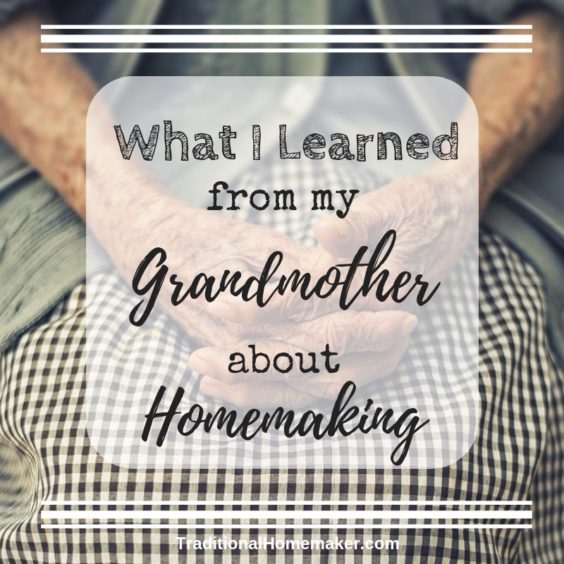 1222shares
This post may contain affiliate links. This means I may receive a small commission when you click on and purchase something through my links. There is no extra cost to you and my opinions are 100% my own! Read more in my full disclosure for more information.

Even though my grandmother lived 10 hours away, I still learned a lot from her. And if I didn’t learn something directly from her, I learned it from my mom who had been taught by her. Now that she’s gone, I’ve been reflecting on what I learned from my grandmother about homemaking.

My grandma was a hardworking lady.

And that’s the understatement of the century. But I don’t know any other way to say it.

If there was a job to be done, she rolled up her sleeves and started and stayed to see it to the end.

Grandma saw to her family’s needs and cared for their home. She knew enough about sewing to keep her family clothed. Cooking was out of necessity and not a joy, but she kept her family fed. She raised six children but she was glad to say goodbye to the baby stage.

Her true love was being outside. My grandmother loved to garden, do field work and take care of their cows. Grandma and Grandpa were dairy farmers until they retired. 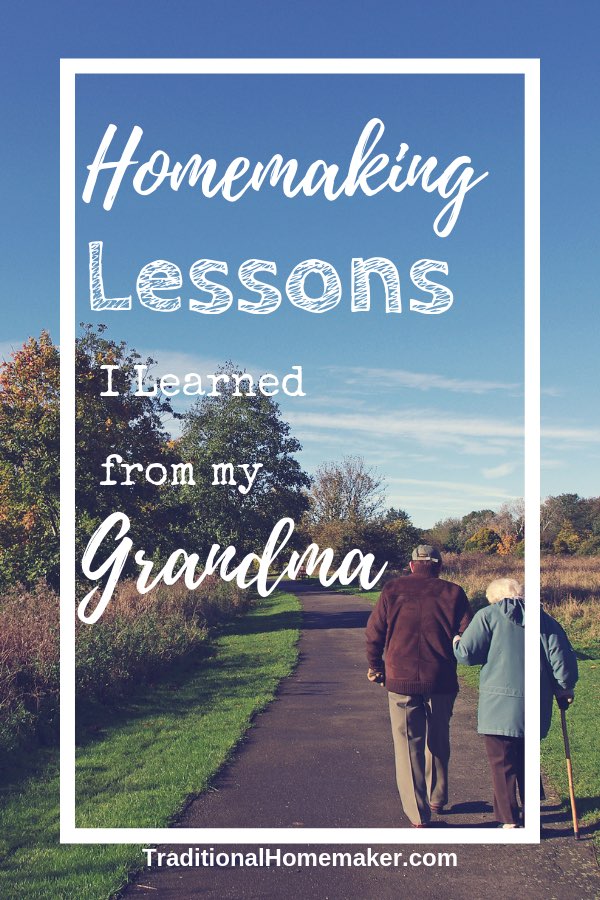 Read More: Why Homemaking is Important

Homemaking Skills for the Modern Housewife

Partly because of the age she lived in but mostly because of her frugality, my grandmother always cooked and baked from scratch. Mostly using their own meat, vegetables and fruit that they had grown and put up for the winter.

Only in her later years did boxes of corn flakes or grape nuts show up in her cupboard.

Read More: How to Plan Your Garden

6 Forgotten Garden Vegetables You Should Grow

What You Need to Start Canning

How to Use a Pressure Canner

How to Can Green Beans

How to Freeze Sweet Corn

2. If You are Sick, Fresh Air will Help

My grandma’s reasoning was “Why laze around the house with a headache? I might as well be out milking cows.”

She pushed through a lot of discomfort and pain because she was such a hard worker.

I remember my grandpa finally convinced her to go in and have her hip replaced. Grandma finally gave in after years of pain.

She got home and grandpa said she was like a spring chicken again! Grandma admitted she should’ve had it done years ago with how good it made her feel.

When I was a girl, fresh air was our remedy as well. Once the puking was over, we were encouraged to get outside. It was okay if we couldn’t do all our chores, but we at least had to help.

Work will take your mind off of your discomfort!

3. Always have an Open Door

After grandma passed away we were looking at her guest book. Just five months prior she had 126 people pass through her home in one month!

No, she didn’t serve a meal to every single one I’m sure. But she had an open door and an open heart and was willing to allow others into her life.

Plus, what a better way to keep a widow lady company than visiting with her. My grandma wasn’t big on tea and didn’t ever have coffee in the house so I’m sure her guests were offered a glass of water with their visit.

My grandmother stood by her less-than-gourmet cooking as the reason no one in her family was ever overweight!

She didn’t put chocolate chips in her cookies. Once in a while they got raisins in them as a treat. Mostly her cookies had oatmeal or bran in them.

My mom recalls grandma’s reaction to her wanting to make a recipe that called for cream cheese. They had to go to town to get the cream cheese because grandma never used it!

Spices were foreign to her. She would use salt and pepper, but mostly the dishes she made were to sustain her family and not impress them. 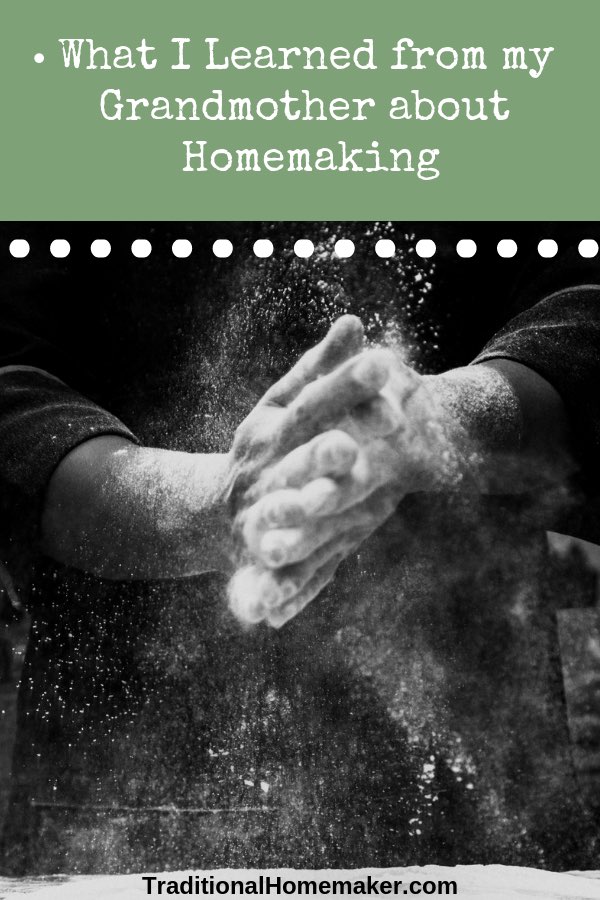 5. Use Lard and Butter

Most of grandma’s baking and cooking was done with lard. Their milk was their income so they didn’t make a lot of their own butter. And buying it was more expensive than lard.

Crisco and other new fangled fats never lived in her cupboards.

Read More: How to Make Lard

I remember her always wearing the same two or three dresses until they wore out. Grandma didn’t care much for sewing, so even when she could afford all the fabric she wanted, she still had maybe six dresses in her closet: two for Sunday, three for the week and one black one for funerals.

Nothing in grandma and grandpa’s house ever got wasted. She didn’t buy plastic wrap or ziplock baggies because they were a waste.

Yogurt cups (even the ones without lids) never got thrown away. Plastic cereal bags got slit up the side and used to cover food.

One time I was helping her with dishes after a big family meal. She took her finger and cleaned off plates and ate what food was left behind.

Food never got “thrown away” but thrown on the garden or fed to the cats.

How to Have a Clean(er) Kitchen Compost Pail

Grandma rarely sat and did nothing. She never had a TV or radio. Her square table in the living room always had a puzzle in progress. It sat in front of the big picture window for good lighting and to watch the birds.

Every morning my grandmother wrote in her diary: mostly the weather, what happened and who she saw.

While reading through one of her diaries after she passed we found this:

Had [one of her children] today. Got home at six and went to the barn to help finish chores.

Grandma could always be found out gathering walnuts to sell at market or helping grandpa fill pot holes in the drive.

When they farmed, she helped at every choring and made sure the children helped as well.

Of course, this was easy for my grandma because she would rather be outside anyways!

Read More: Honoring Your Husband with Your Homemaking

Even though my grandparents sold their cows before I remember, they didn’t retire. They went to hauling Amish most days.

They regularly visited those in nursing homes and other shut-ins.

Together they served on several Christian Aid Ministry (CAM) teams around the country where natural disasters had struck.

Every fall they would bring a couple hundred bushels of peaches and pears up from Michigan to sell to our produce customers. She would sit for hours peeling and pitting peaches to can a couple bushels for our family.

. Her Christian faith defined her and made her a better wife, mother and grandmother.

Every morning she would sit out in the dining room on her green couch and read. No matter how many people were staying at her house or how busy the day that lay ahead was.

We all can learn something about homemaking from our grandmothers.

My grandmother went to be with Jesus at the age of 92. I never saw my grandma age until grandpa passed away three years earlier. Those three years without him was the first time I saw her sit and do nothing but watch the birds.

She gave up driving and staying alone after he passed, too. Grandpa’s wish always was that he would go first. And he did. Once he was gone, it was as if grandma was finally okay with someone else taking care of her instead of her always taking care of others.

Even though I don’t have a ton of memories of my grandmother, the ones I have are a great example of daily, normal life. Nothing extravagant, no big gifts, no kisses.

Her quiet, steady, Biblical example of homemaking, being a wife and living simply will stay with me forever.

Pin this to save for later! 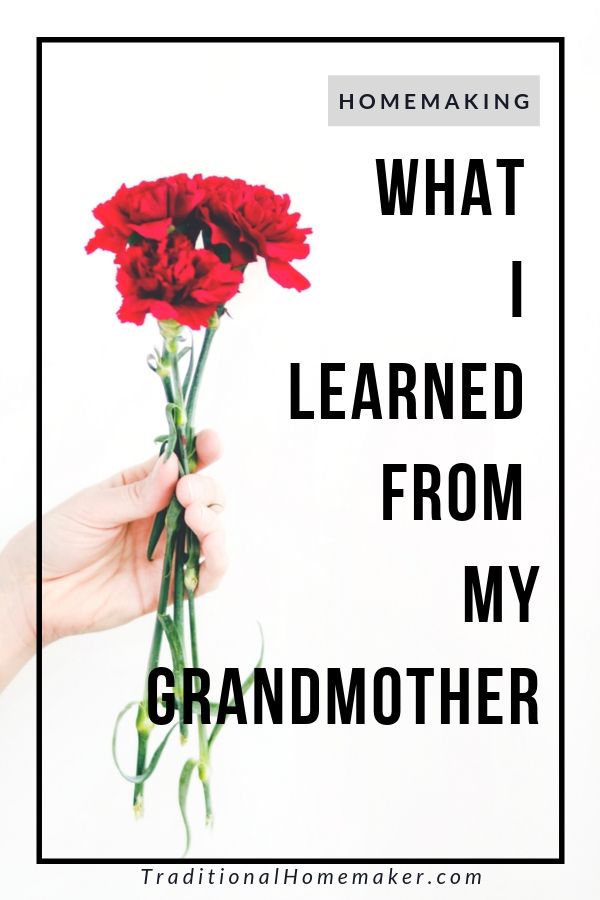 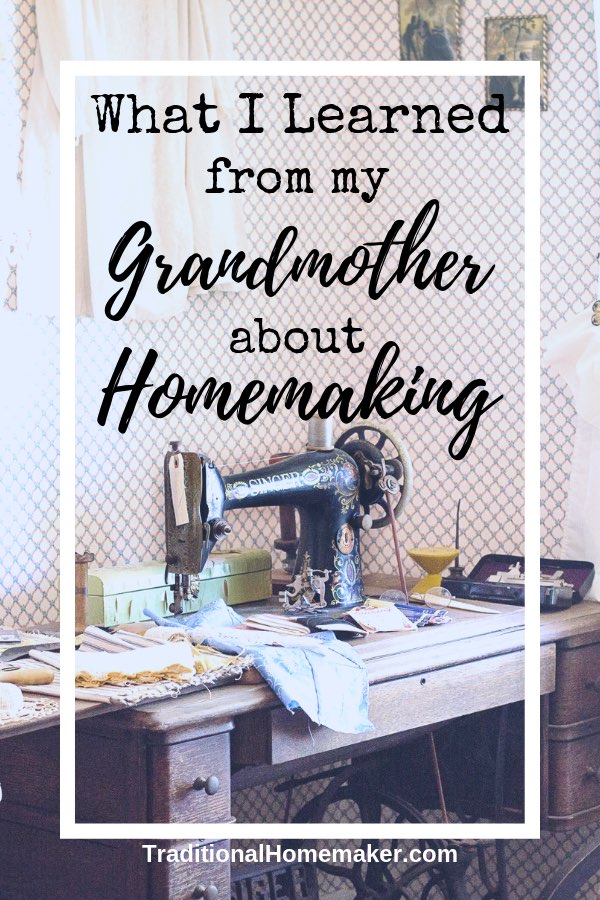 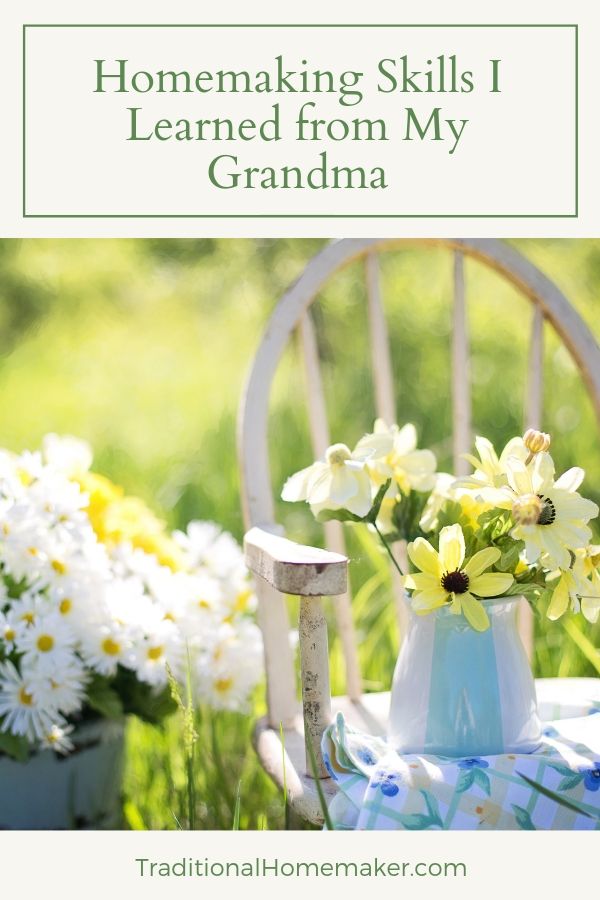 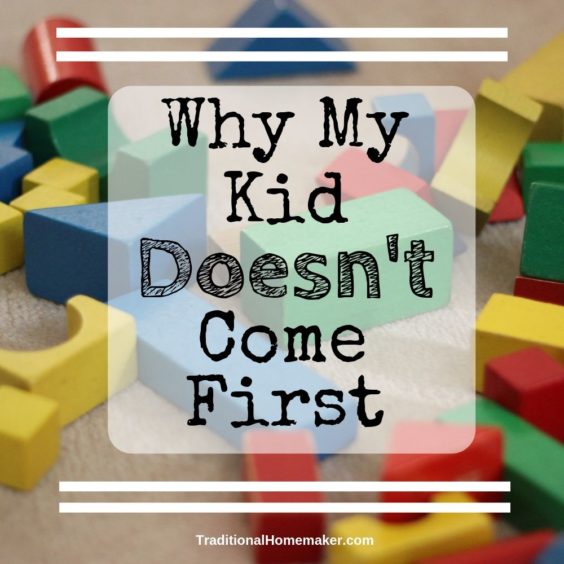 Why My Kid Doesn’t Come First Baking Tips and Techniques to Become a Better Baker 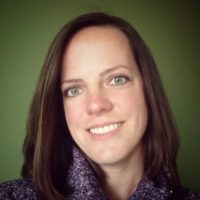